Expanding on Excellence: Vote for Sensata as a Leader in Solar Energy

Now, through October 31, 2016, you can vote for Sensata Technologies as a Leader in Solar Energy. We are excited to have been nominated, and would appreciate your support.

Tips on Sizing an Array According to Battery Capacity

NABCEP-certified instructor, Alan Santos-Buch, gives some tips on how to size an array to take battery capacity into account. See the whole tip in the March, 2016 issue of Solar Power World. 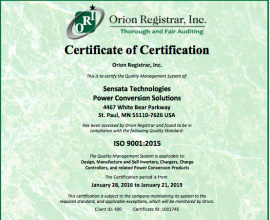 Magnum-Dimensions is proud to announce the ISO certification to the new 9001:2015 standard. We are among the first to earn this new distinction which is a testament to the manufacturing processes and practices in our White Bear Lake facility.

Sensata Technologies is proud to support the efforts of The Physics Factory and the Physics Bus with the donation of a Magnum MS Series Inverter/Charger.