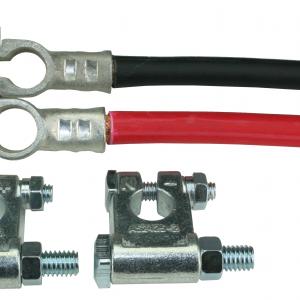 Inverters have two or three sets of power carrying wires to be concerned about: the wires from the battery to the inverter, the wires from the inverter to the home (or other load), and in some cases the wiring from a backup generator or other AC source. The wire or cables from the batteries to the inverter are much more critical, and are often undersized. In some cases, the cable may be large enough to carry the “static” load of a motor, but on start up will drop so much voltage in the cable that the inverter will shut down. The same thing can happen with small inverters and TV sets – a TV may only use 100 watts, but the start up surge may be 300 watts for a few seconds. Wire lengths from the battery should always be kept as short as possible, but not so tight that there is a strain on the connections.